A postmortem on my failed game THAT LIZARD STOLE MY LUNCH (TLSML).

If you are interested check out the latest changes:)

With TLSML I was trying to make something super accessible that had long strategic arcs. My theory was that if I made an extremely simple and understandable base mechanic that I could build on top of it with longer arcs and have something both simple and deep.

This didn’t really work at all.

But I learnt a lot from making this failed game so here goes on trying to explain some of that. This is all personal experience I have tried to analyze, so take everything with a pinch of salt, but hopefully you can learn something from my mistakes.

You can also read through the devlog and see the changes that I tried to make to save the game as it went on. I like the devlog its fun to see what happened. 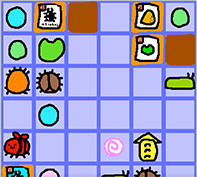 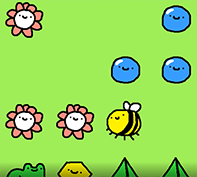 3rd version of BUSY BEE, this was the most complete

First build with what is close to the final art. Note the deck on the top left and the CARDS at the very top. Both are features that really over complicated things

Attemp to bring the CARDS back by making them charge your special skill. This was also removed from over complicating things

I'm excited about making more strategy games and playing what everyone else is making.

I have like a million prototypes happening right now so keep an eye out for games from meeeee in the near future :)

I wanted to end this with something nice and positive so here is a .gif I made when testing the final game. It was a moment where an interesting decision came up and I had to think about my move for a moment. It's only a fraction of what I was trying to achieve with this game but it makes me a happy snake :)

Get THAT LIZARD STOLE MY LUNCH

THAT LIZARD STOLE MY LUNCH

a cute strategy game for you

Nice postmortem! Really looking forward to your next project! :)

Thank you so much APiotrW! This means a lot to me! :)